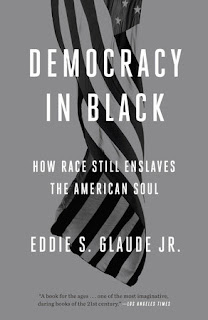 Democracy in Black: How Race still enslaves the American Soul, written by Princeton University Professor Eddie S. Glaude has been on the bookshelves for about two years now.  The book was released January 2016 just as President Obama entered his last year in the White House.  In this book Glaude confronts the American democracy project and its contradiction – a contradiction seemingly rooted in the treatment of African Americans versus the American ideals of freedom, justice and equality. Glaude notes the contradiction and writes: “People could talk of freedom and liberty and hold black slaves.” As the subtitle suggests, this is a book unmistakenly about race and white supremacy in America.


He challenges American democracy by linking this contradiction to white supremacy as the driving force behind what Glaude describes as the value gap, opportunity deserts and racial habits.  Glaude also writes about the concept of disremembering or active forgetting – a critical component to not just widening the value gap but advancing white supremacy.

Democracy in Black is a clearly written polemic that’s easy to read without the dense academic prose. Glaude attempts to make a case about the far reaching implications of this American contradiction with anecdotes, historical and contemporary examples along with his personal observations and experiences. You will find featured prominently throughout the book, quotes from James Baldwin, Martin Luther King and W.E.B Dubois that Glaude uses to grapple with his thoughts on white supremacy, the value gap, opportunity deserts, and racial habits.

Glaude takes on a wide range of topics that includes a brief history lesson on the origins of American contradiction. He digs into the implications and dangerousness of white fear, but more specifically white fear of the anticipation or rather, the expectation of black criminality.  He describes the narrowness of today’s black politics and black leadership that includes a searing critique of Reverend Al Sharpton and President Obama. While Glaude is not likely to get any love from Sharpton or Obama fans, he won't receive any from the clergy either when he talks about the death of the black church and their retreat as a progressive institution. He also takes on struggling HBCU’s, revealing his thoughts about President Obama’s apparent dismissive approach. His discussion about race also includes, the public resistance to the deaths of Trayvon Martin and Michael Brown, radical activism, and the Great Recession, where he writes “…the very foundations of Black America have cracked under the weight of the economic fallout.” 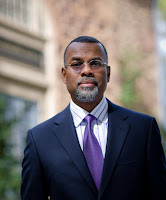 Obama where he writes, “Obama refuses to engage directly the crisis sweeping black America.” Or when he says Obama was supposed to be more – he was supposed to be different, “He was ideally our black progressive antidote to the conservative policies of the Bush years.” Such provocative statements are certain to draw condemnation from Obama’s supporters who fiercely defend him at all costs. There’s Glaude’s prescription for presidential politics where he advocates for essentially a protest vote where there’s no vote for the presidential candidates or simply left “blank” – hence the “Blankout” strategy. With a hint of naiveté, Glaude reveals his belief in America when he talks about remaking American democracy.  He says a revolution of value is needed to transform the value gap and racial habits, and there are three ways to accomplish this - with changes in how we view government, black people and to what truly matters as Americans.  Yet in this context, Glaude did not include his views around “respectability politics” or provide a more expansive analysis on structural racism.  Although Glaude outlines some meaningful remedies to remake American democracy – there’s this muted dismissal of the realities around those interests or issues that inherently generates opposition. Whether the issue is poverty, minimum wage, healthcare, crime, or even support for the Confederate flag – there will always be a clash of two sides.

Nevertheless, Democracy in Black is definitely worth the time to read as Glaude makes more than a few points throughout the book that argues for a new way of thinking.  The Ferguson protests, the Black Lives Matter movement, and the Forward Together campaign - the politics of disruption are just a few examples that he uses as being informed by taking a more radical approach to transforming American democracy.  Just as important is Glaude’s inclusion of the need to transform the current state of black politics from its limited and narrow state to one that is more expansive in political expression. Like Glaude says – something has to change.

Posted by Brooks blackboard at 3:12 PM