The Big Business of Poverty pimps the poor

Two years ago, during the aftermath of police violence and protest demonstrations in Ferguson, Missouri, the nation witnessed a militarized police force, and learned of dismal police-community relations, as well as a scheme resembling debtor prisons.  The Department of Justice (DOJ) investigated and issued their report, "Investigation of the Ferguson Police Department".

They found practices that were unlawful, deeply-entrenched and unconstitutional: “Ferguson’s law enforcement practices are shaped by the City’s focus on revenue rather than by public safety needs. This emphasis on revenue has compromised the institutional character of Ferguson’s police department, contributing to a pattern of unconstitutional policing, and has also shaped its municipal court, leading to procedures that raise due process concerns and inflict unnecessary harm on members of the Ferguson community.” While the report shows a link between debtor prisons and the prison industrial complex – there’s also strong link to the growing poverty industry as well too. 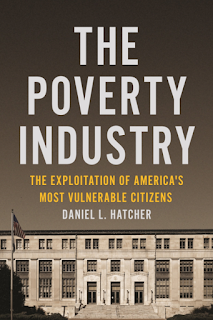 Daniel L. Hatcher has written a new book on this topic called, The Poverty Industry: The exploitation of America’s most vulnerable citizens.  Mr. Hatcher recently visited the Busboys and Poets Bookstore and Café in Washington D. C., on June 29th, to talk about his new book.  For roughly thirty minutes before a question/answer session, Mr. Hatcher provided a glimpse into the poverty industrial complex and how this massive network manages to divert funds from, who Mr. Hatcher appropriately characterizes as America’s most vulnerable citizens – impoverished families, abused and neglected children, and the disabled and elderly poor. “My hope to getting this book out is to provide awareness because with awareness you have the potential for change.  So in the poverty industry, I’m hoping to expose and explain several of these revenue maximizing practices that states and state agencies to use on the most vulnerable populations,” explains Mr. Hatcher.

During his discussion of the book, Mr. Hatcher outlined the scope of the poverty industrial complex – foster care, nursing homes, state human agencies, and private companies such as Maximus and WellCare who are chasing the dollars – child support benefits, Social Security Survivor benefits, Veterans Assistance benefits, disability benefits, and yes - federal Medicaid benefits. Mr. Hatcher said, “With the book, I try to step back a bit and see how these interconnections are happening, and the alarming thing is that you see a shift in the mission, where you have the state governments and the state human services agencies that exist to serve the public welfare are instead turning their focus their efforts on maximizing revenue and even hiring companies to help them in that process.”

Mr. Hatcher recounted his days working with the Baltimore City foster care system as the trigger to prompt him to really dig into and research the issue: “It was alarming to me when I realized that the very agencies that exist to serve the best interest of foster children were actually using those kids as a source of funds, finding a way to seek out benefits, in order to take control of those monies as fiduciary in order divert funds to state coffers,” Hatcher continues, “I realized that some similar practices with child support where states are not only taking child support but taking disability survivor benefits but they’re taking child support and sometimes it’s the same children”.

Mr. Hatcher described the extent of the greed involved as he explained burial plots being seized in Nebraska while the Maryland foster care agency drafts regulations to control all assets belonging to foster care children. He shared incredible anecdotes about young people like Alex, who spent six years in Maryland’s foster care system before aging out: “The foster care agency realizes that after his father dies, the boy is entitled to a Social Security Survivor benefit – they never tell him.  They never tell him they’re applying for benefits. They never tell him they’re applying as a representative payee so they can control the money - they never tell him that they were taking the funds.”  He went on to describe Alex’s life of struggles with bouts of homelessness and unemployment but whose life could have been positively impacted had he received the benefits that were properly his.

This is just one example of the funds and benefits diverted through what Mr. Hatcher explains as revenue generating strategies that utilize sophisticated data analytics to target children who are programmatically attached to the most benefit dollars, funds and assets. “This is happening, I think, across the country because states are cash strapped – both red states and blue states alike across the country have been unwilling to raise revenue through general taxation, Mr. Hatcher explains, “When you see this occurring, states looking for money elsewhere with behind the scenes mechanisms.” A June 2016 report - Ranking the States by Fiscal Condition - produced by George Mason University supports Mr. Hatcher’s point.  “The finances of state governments continue to be shaped by a sluggish economy and steady but modest revenue growth since the recovery from the Great Recession of 2008 began in 2011. According to the Government Accountability Office (GAO), if current tax rates remain in place, total tax revenues for state and local governments as a percentage of GDP will not return to 2007 levels until 2047”.

While Rep. Paul Ryan (R-WI) seeks massive cuts to the poverty industrial complex, Mr. Hatcher takes a different view based on his extensive research: “...The answer is not to cut the aid, that aid program, the answer is to stop the misuse…”

Posted by Brooks Blackboard at 4:47 PM