President Trump police speech "jokes" about excessive use of force 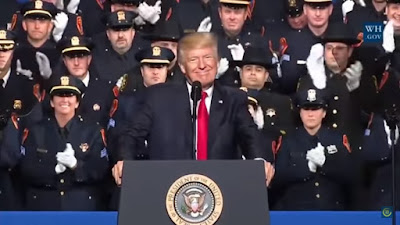 President Trump has again raised concerns with his tough on crime message when he publicly endorsed the use of police violence.  On July 28th, the president visited Suffolk County Community College to talk about the federal plans for the MS-13 gang: “…Right now, we have less than 6,000 Enforcement and Removal Officers in ICE.  This is not enough to protect a nation of more than 320 million people.  It's essential that Congress fund another 10,000 ICE officers…” But then the president went on to say: “And when you see these towns and when you see these thugs being thrown into the back of a paddy wagon -- you just see them thrown in, rough -- I said, please don’t be too nice.  Like when you guys put somebody in the car and you're protecting their head, you know, the way you put their hand over?  Like, don’t hit their head and they've just killed somebody -- don't hit their head.  I said, you can take the hand away, okay?”

While the White House dismissed the reckless remarks as a joke, widespread criticism and condemnation has been nevertheless unleashed from both law enforcement and civil liberties groups. Described as “unconscionable”, “irresponsible” and “unprofessional”, the president remarks underline the deep concerns that range from blatant violation of constitutional rights to the negative impact on police-community relations. What is equally disturbing is that in the past his inflammatory comments not only sparked several incidents of physical violence at his campaign events but his election victory triggered a nationwide outbreak of racial attacks.

This latest controversy should serve as a reminder of the 2016 campaign and primary season when Trump would often refer to himself as the law and order president; voiced his support for stop and frisk tactics and federal intervention as a way to deal with the gun violence in Chicago; while delivering his get tough message via social media: “This election is a choice between law, order & safety - or chaos, crime & violence. I will make America safe again for everyone.  Crime is out of control, and rapidly getting worse. Look what is going on in Chicago and our inner cities.”

As part of the presidential transition from Obama to Trump, the 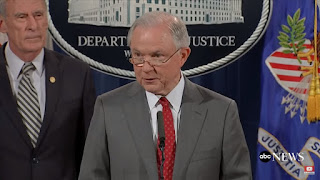 White House website was redesigned to include issues deemed important to the new president such as Standing Up for our Law Enforcement Community. The new president escalated concerns with his appointment of Senator Jeff Sessions as Attorney General. In his opening statement during his confirmation hearings, Sessions declared: “If we are to be more effective in dealing with rising crime, we will have to rely heavily on local law enforcement to lead the way. To do that, they must know that they are supported. If I am so fortunate as to be confirmed as Attorney General, they can be assured that they will have my support. In his six months as Attorney General, we’ve witnessed Sessions announcing his intention to resume the drug war, forfeit property and undo medical marijuana protections.

In addition to Trump’s controversial picks for Attorney General and the Supreme Court, he also signed three “law and order” executive orders that would; create a task force that would propose new legislation to reduce crime by highlighting drug trafficking, illegal immigration and violent crime; increase penalties for crimes committed against officers, and strengthen federal law to combat transnational criminal organizations and prevent international trafficking.

Discussion Question:
Do you think the president was ‘joking’ when he made the remarks? Do you have any concerns about the possible implications of Trumps remarks? How much confidence do you have in the Congressional Black Caucus to impede the progress of the president’s plan for law and order? What about the larger civil rights/civil liberties community? What do you think is the best way to pressure Congress, and legislators at the state and local level?