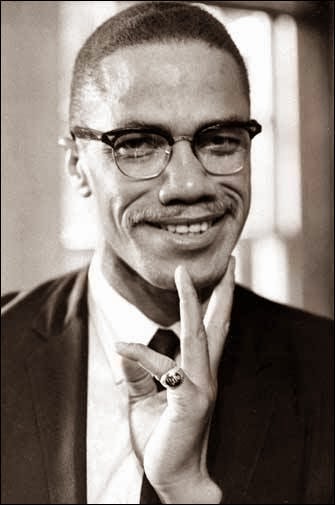 We celebrate the birthday of Malcolm X – where on this day in 1925, he would have been 89 years old. Knowing that the 19th was approaching, the question for me, was a typical one for any writer – what can I write that has not been written before?  But after a few short moments of thinking about his significance - his legacy – writing about Malcolm X would not be too difficult. When I think about Malcolm X, my first thought is how much this man is sorely missed considering today’s empty space of true leadership.  After reading through a few of his speeches, I was reminded that although he was taken much too soon - how so much material he left behind, almost a blueprint to be followed.  And that’s the significance of Malcolm X – that is his legacy – the continued and uninterrupted relevance of his words to the current issues of the day. But in addition to that – he remains a hero to so many because he was unflinching, uncompromising and courageous in the face of American apartheid in the bowels of white supremacy. That’s why it is so disturbing when revisionist history attempts to casts Malcolm as civil rights activist  - Malcolm X was always a Black Nationalist who believed in and was committed to building a movement that connected Blacks across the world from America to the Caribbean to Africa.  The words of Malcolm X continues to resonate very deeply in the Black communities all over the country because those words were delivered with such a powerful clarity coupled with a forward thinking that is unseen today amongst those who are self-called leaders.  That is why the Brother Minister means so much today – why the legacy of Malcolm X continues to grow and inspire. Its no mystery why Malcolm has such an undeniable strong connection with Black communities all over the country – he stood toe to toe against white supremacy and did not blink.

Malcolm X wrestled with the most powerful issues against the most powerful forces. The Brother Minister typically took on the hard issues – and connected the treads of contradiction woven between racism, American apartheid, American foreign policy to American ideals of justice and equality wrapped in American exceptionalism.  But he also discussed with equal weight issues related to Africa, colonialism, human rights, American genocide and bringing the case to the United Nations. Malcolm X’s legacy stands strong today because his thinking, and his political approach surpassed civil rights - he was about human rights within a global view – a world view.  Malcolm was about the work in building relationships across the globe with other peoples of color and using the United Nations and all of its resources and support in pursuit of human rights.

Hundreds of thousands, if not millions will recognize the contributions, the work, the unfulfilled promise of Malcolm X with pure adoration and love – much love for this man who was  a revolutionary.  The many festivals, parades, films, and ceremonies will recognize El-Hajj Malik Shabazz  - Malcolm X on this day, May 19th – a day for us to honor his memory…to commit ourselves to continue the work.  There is no question that Malcolm X would have been an ardent supporter of the reparations movement, a supporter of political prisoners, a harsh critic of the death penalty, the criminal justice system, of police brutality, of the gentrification affecting black communities nationwide like a case of termites – and he would have been a vocal critic of the Obama administration.

The love for Malcolm X will be witnessed for all to see with events scheduled to be held nationwide from Oakland to New Jersey to Atlanta - all highlighting the work of Malcolm X – particularly as a new generation emerges and becomes acquainted with his work as a human rights activist.  There is the annual pilgrimage to his gravesite in Ferncliff, NY, a Jazz Arts Festival in Oakland, a festival and parade in Houston, celebrations taking place in Fort Wayne, a week-long celebration at the Shabazz Public School Academy in Lansing, Michigan, in San Francisco, in the Huey P. Newton/Bobby Seale Student Lounge at Merritt College in Oakland California, and in Jefferson City, Missouri.  There’s also a film tribute in Prince George County Library in Oxon, Maryland and events taking place at the Malcolm X and Betty Shabazz Memorial and Educational Center.

Happy Birthday Malcolm X! We stand humble in the shadow of your greatness – committed to carry the work forward.
Posted by Brooks Blackboard at 10:17 PM