AND STILL NO BLACK GOVERNORS...

AND STILL NO BLACK GOVERNORS

When the smoke cleared after the 2018 elections   finally ended – there are still zero black governors. The last African American elected to the governors’ mansion was Deval Patrick in Massachusetts, and that was ten years ago.  The challenge for black candidates for state wide offices like governor is building a campaign that also appeals beyond their local base to white moderate Democrats throughout the state. Nevertheless, the 2018 elections witnessed history in a sense in that not one but three blacks – including one woman - ran as the Democratic Party’s nominee for the Governor’s seat.  Although all three lost their elections, there’s some comfort to be taken from the elections results and exit poll data.  Encouraging signs despite loss

Opposition to the Trump presidency has clearly translated into a more diverse pool of candidates. Since the 2016 election, there’s been such a surge in electoral politics activism – an opposition that has clearly translated into a diverse pool of candidates running in the 2018 elections on all levels of government – local, state and federal offices.

In Maryland, Ben Jealous not only took on a popular incumbent Republican governor but one with millions of cash on hand who managed to find support among Democrats. His progressive campaign garnered endorsements from Barack Obama, Kamala Harris, Bernie Sanders, as well as labor unions such as Service Employees International Union (SEIU), American Federation of State, County & Municipal Employees (AFSCME), and the Maryland State Education Association. Jealous campaigned throughout the state of Maryland delivering his progressive message for $15 minimum wage, Medicare-for-all, the legalization and taxation of marijuana and tuition-free college.

Jealous was defeated with 43.5% of over two million votes cast. The reasons for his defeat comes down to the lack of both financial and political support.  For example, a Washington Post poll taken a month before the election revealed 35% of Democrats and 64% of independents support Hogan over Jealous along with 91% of Republicans. In addition there were reports of Jealous’ paltry coffers with less than $400,000 on hand – refusing to take money from large corporations.

In defeat, Jealous was able to list the progressive gains in Maryland since his campaign began with free community college tuition that is now a reality, the removal of Roger Taney’s statue along with defeating the forces of fracking from setting up shop in Maryland.

The gubernatorial races in both Florida and Georgia however draws a sharp contrast when compared to Maryland.  For one, these two states haven’t elected an Democratic Governor in the last 20 years. President Trump managed to win both states in 2016 and endorsed both of the Republican candidates. Furthermore, both Florida and Georgia have stringent restrictions to voting rights with vote suppression measures.  Yet, despite of the odds stacked against both of the black candidates for Governor with considering the racist activities and voter suppression tactics occurring before and during election day, their progressive campaigns apparently resonated – even in Trump country.  They both lost in very close elections that leaves one to think would the results be any different if every vote was indeed counted. For nearly two weeks, there was a flurry of lawsuits to ensure every vote gets counted despite legally mandated deadlines. In the final count, Abrams got 48.8% of the votes cast, losing her race by less than 55, 000 votes while Gillum lost by a razor thin margin of less than 33, 000 with 49.2 % of the vote.

Just as in Maryland, there are signs of encouragement in defeat. For example, along with increased voter turnout, the 2018 elections witnessed elevated civic engagement, and approved ballot measure to restore voting rights to ex-felons.

Exit poll data for Florida and Georgia reveals when compared to the 2014 elections, the 2018 elections indicated jumps in voter turnout that translated into gains from independents, liberals and moderates. With two years remaining before the 2020 elections, only time will tell if the 2018 elections can finally serve as a model for candidates to unapologetically highlight progressive causes minimum wage, voting rights, and reforms to criminal justice, health care and education – knowing these issues are increasingly gaining traction with voters who either resist or embrace the socialist labels.

Posted by Brooks Blackboard at 6:36 PM No comments:

Email ThisBlogThis!Share to TwitterShare to FacebookShare to Pinterest
Labels: #BrooksBlackboard

ABRAMS NOT GOING AWAY QUIETLY

Although the much talked about blue wave managed to sweep in a number of black elected officials during the 2018 election cycle – the nation still has no black governors.

This year’s election cycle saw an unprecedented 3 blacks running for governor; Ben Jealous (Maryland), Stacey Abrams (Georgia) and Andrew Gillum (Florida) each won their respective primaries but lost in the general election.  The race in Maryland was settled on election night with Jealous pulling in 43.5% of the vote with over one million votes, but lost by over 270, 000 votes. The races in Florida and Georgia, however were too close to call on election night forcing Gillum to withdraw his concession while Abrams pointed to the thousands of uncounted votes left on the table and just flatly refused to concede her race.

Governor-elect Brian Kemp nevertheless declared victory and ironically two days later, resigned as the Georgia’s secretary of state.  The same secretary of state who was repeatedly under fire for deploying voter suppression tactics for years leading right up to the 2018 elections.  The nation watched as the drama unfolded in both Florida and Georgia with accusations of racism, voter suppression tactics, election day shenanigans, reports of long voter lines along with “misplaced” ballots and missed deadlines.  Both campaigns took on what appeared to be herculean efforts to ensure every vote is counted with a flurry of lawsuits.

But after nearly two weeks, Abrams and Gillum officially ended their gubernatorial campaigns.  In conceding the election Gillum asserted, “We wanted to make sure that every single vote, as long as it was a legally cast vote, we wanted those votes to be counted.”

But Abrams, on the other hand, not only refused to concede the race to Kemp but took a step further 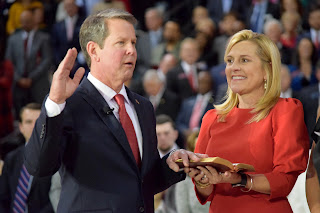 with her refusal to acknowledge the legitimacy of Kemp’s win.  When she ended her campaign, Abrams spoke to her supporters and said, "…So let's be clear, this is not a speech of concession, because concession means to acknowledge an action is right, true or proper. As a woman of conscience and faith, I cannot concede that.”  A few days later, she generated more headlines and debate after appearing on CNN’s Sunday’s political talk show, State of the Union. On the show, Abrams remained persistent in her refusal to recognize Kemp as the legitimate governor. Although she acknowledged Kemp receiving the number of votes needed to be declared the “legal” winner according to the elections laws but as Abrams explained: “…but we know that the law does not do what it should and that something legal does not make it right. This is someone who compromised our systems, he’s compromised our Democratic systems.”

When Abrams spoke to her supporters, she announced the launch of a new voting rights organization, Fair Fight Georgia and plans to file a major federal lawsuit against Georgia for gross mismanagement and to protect future elections from unconstitutional actions. Days after appearing on CNN, Fight Fair Action filed a lawsuit in the U.S. District Court for the Northern District of Georgia.  The lawsuit points out that Georgia has a history of neglecting its elections infrastructure and suppressing votes – particularly of people of color. “The Secretary of State and State Election Board grossly mismanaged an election that deprived Georgia citizens, and particularly citizens of color, of their fundamental right to vote.”

The lawsuit describes Georgia’s electoral process as a violation to the Constitution’s 1st, 13th and 14th Amendment as well as Section II of the Voting Rights Act. The lawsuit also discloses a number of allegations with widespread implications from voter suppression tactics designed to disenfranchise voters. The lawsuit cites the mass purging of voter registrations, the closing and relocating polling places, the failure to provide functioning voting machines, provisional and absentee ballots.  Abrams tells her supporters, “…Because these votes are our voices. We are each entitled to our choices…”

Posted by Brooks Blackboard at 7:27 PM No comments: