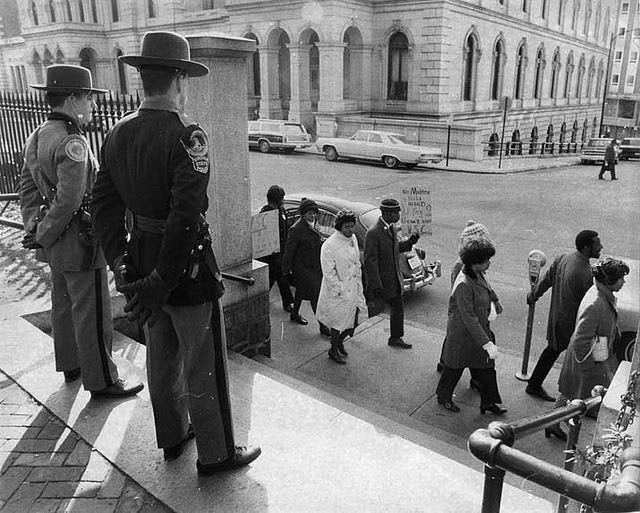 Throughout 2014, The Blackboard will occasionally post to a series of articles about the sixties, in general but 1964, in particular. The Sixties is well acknowledged as a period of transformative and fundamental change in America, especially as a time when race assumed a more pivotal role in American politics. There were three presidential campaigns during this turbulent period in American history that witnessed the contrasting forces of racial liberalism and racial conservatism collide against each other – in the backdrop of a national movement for civil rights for blacks. Although a strong argument can be made for the tumultuous year of 1968 as the single pivotal year during the sixties, a stronger argument can be made for 1964 as the pivotal year in American politics for several reasons.

For example during 1964, the 24th Amendment was passed opposing the poll tax, the foundation was laid down for President Lyndon B. Johnson’s vision for a Great Society with the Equal Opportunity Act to fight poverty, there was the passage of the Civil Rights Act, the formation of the Mississippi Freedom Democratic Party, Dr. Martin Luther King being awarded the Nobel Peace Prize, rebellions took place in black communities in New York, New Jersey, Chicago and Philadelphia, and three civil rights workers were killed. On the international scene, Malawi and Zambia became independent African nations while Nelson Mandela was sentenced to life in prison – starting a nearly 27 year stretch as an imprisoned revolutionary and political prisoner.

But there was also a presidential election that proved to be significant in its own right. The 1964 presidential election saw a political struggle between Lyndon B. Johnson, Democrat and the face of racial liberalism, versus Barry Goldwater, the Republican nominee and leader of the conservative movement. The polarizing forces that pitted racial liberalism and racial conservatism against each other set off such a domino effect that would eventually change the course of American politics for many years to come.

The 1964 presidential election exposed the use of race as a campaign issue on the campaign trail. Also keep in mind that the failed Goldwater campaign of 1964 provided a blueprint for conservatives such as Ronald Reagan in his run for California’s governor’s seat in 1966, George Wallace and Richard Nixon for the presidency in 1968, and Reagan for the presidency in 1980. At the same time, the nation also saw the Democratic Party’s simultaneous retreat from their fleeting support of racial liberalism in the middle to late 60’s when confronted with white resistance and the conservative appeal to that resistance.

Picture this for a moment - a smoldering and rising resistance along with stark opposition to the Civil Rights legislation; liberalism and conservatism solidified along racial lines due to the effective connection of the black underclass to the Democratic Party; the mounting tension due to emerging white anxiety and the subsequent backlash as a result of the cost burden to finance the Johnson’s Great Society and the Vietnam war. In other words, the passage of the landmark 1964 civil rights law not only guaranteed constitutional protections for blacks but simultaneously opened the floodgates of backlash and resistance amongst conservatives against blacks, liberals and the Democratic Party. Conservatives would use the 1964 Civil Rights law as well as social programs designed to improve the quality of life for blacks as a wedge issue – a political weapon and mobilizing tool to be used routinely by Barry Goldwater, George Wallace, Richard Nixon, Ronald Reagan and George Bush.

Dr. King wrote: “America is fortunate that the strength and militancy of the Negro protest has been tempered by a sense of responsibility. This advantage can be dissipated if some current myths are not eliminated…Among many white Americans who have recently achieved middle class status or regard themselves close to it, there is a prevailing belief that the Negro is moving too fast and their speed imperils the security of whites. Those who feel this way refer to their own experience and conclude that while they waited long for their chance, the Negro is expecting special advantages from the government.” King continues his argument, “It is also a hard fact that none had the experiences of Negroes. No one else endured chattel slavery on American soil. No one suffered discrimination so intensely or so long as the Negro. In one or two generations, the conditions of life for white Americans altered radically. For Negroes, after three centuries, wretchedness and misery still afflict the majority.”

The first post in this series is forthcoming and will focus on the 50th anniversary of President Johnson announcing his proposal for an unconditional war on poverty with a price tag of one billion dollars.


Photo credit: ValentineRHC via photopin cc
Posted by Brooks Blackboard at 1:00 AM