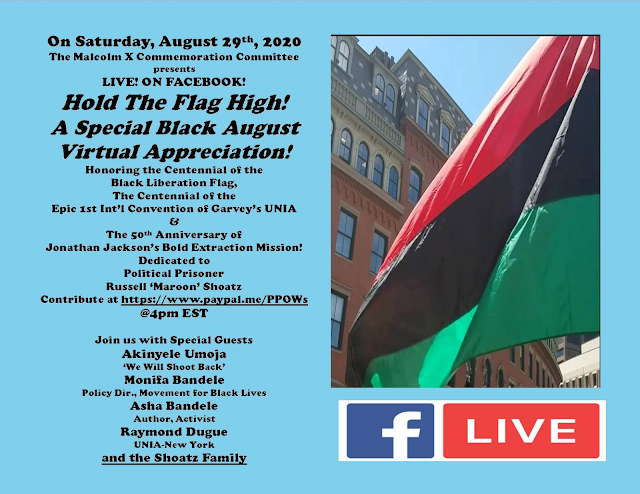 Persons wishing to contribute to Relief Efforts for Mr. Shoatz can make contributions at https://www.paypal.me/PPOWs.

These monthly forums, with their political prisoner spotlights, are an effort by the organizers to make up for their not being able to host their annual political prisoner dinner benefit that they have proudly hosted over the last 25 years because of the Covid19 Pandemic.

Special guests for this engaging dialogue will be Prof. Akinyele Umoja, author of We Will Shoot Back, Monifa Bandele, Policy Director of Movement For Black Lives and formerly of the Black August Hip Hop Campaign, author activist Asha Bandele, and Raymond Dugue, the 2nd Assistant President General of the UNIA-ACL.

Professor Umoja will historicize Jonathan Jackson’s bold action. Monifa Bandele, who will be coming off of a one-day national convention for the Movement For Black Lives, will talk about those important current organizing efforts and will recall the Black August Hip Hop project that sought to bring together Conscious HipHop between Cuba and the United States. She will also recall the pivotal presence of exiled political prisoner Nehanda Abiodun, who passed away recently and who played an important role, in that cultural work effort. Asha Bandele will tell of her moving story on political prisoner Jalil Muntaqim and how NY Attorney General Letitia James wrongly blocked his recent release from prison after 49 years. Incredibly, Muntaqim, now 68, contracted Covid19 and nearly died upon the denial of his release. Raymond Dugue will discuss the epic achievements of Marcus Garvey’s organizing legacy.  In underhanded efforts to derail his mass appeal in the United States, Garvey was framed for Mail Fraud and became the first Black political prisoner of the Modern Age!

The adoption of the Black Liberation Flag took place at that epic first International Convention on August 13, 1920 in Madison Square Garden. Even though Mr. Garvey would endure the ordeal of being framed, sent to prison, becoming the first modern Black political prisoner, and then deported, the UNIA would go on to host eight International Conventions, the final being in 1938.

Black August was launched by the Black Panther Party to honor George and Jonathan Jackson who were killed within a year of each other, and to encourage organized support for political prisoners. Jonathan was killed in that ill-fated mission 50 years ago on August 7th, 1970. George Jackson, the legendary author of The Soledad Letters and Blood In My Eye, was killed in an Uprising at San Quentin Prison on August 21st, 1971.

In recent years, serious Pan Africanists have broadened the significance of Black August to remember horrible expressions that are representative of violent racial oppression, such as the lynching of Emmitt Till on August 28th, 1955, the tank and bulldozer attack by Philadelphia police on MOVE on August 8th, 1978, the savage beating and sodomizing of Abner Louima by NYPD on August 9th, 1997, and the recent spectacle police killing of Michael Brown in Ferguson, Missouri on August 9th, 2014. It has also come to include an appreciation of a broad range of profound resistance to oppression ranging from Nonviolent Direct Action Campaigns like the Defiance Campaign of Black South African women against Apartheid’s hated Pass Laws on August 9th, 1956, to urban Uprisings like the Watts Rebellion of August 11-15th, 1965, to the epic Slave Uprisings of Nat Turner of August 21st, 1831 and the launching of the epic Haitian Revolution on August 14, 1791, and to also honor the birth of organizing legends like Carlos Russell, who gave us Black Solidarity, who was born on August 6th, 1934, Marcus Garvey born on August 17th, 1887, Fidel Castro born on August 13, 1926 and Fred Hampton born on August 30th, 1948.

For more information about this event or the work of the Malcolm X Commemoration Committee, please call 973 202 0745

Posted by Brooks Blackboard at 7:00 PM