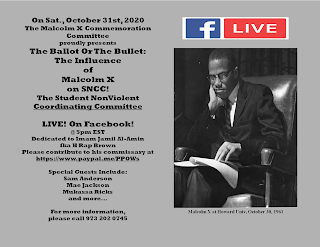 This roundtable will take place at 5pm on Facebook Live!

Special guests for this engaging dialogue will be former SNCC members Prof. Sam Anderson, author of The Black Holocaust For Beginners, Mae Jackson, who was also a founder of Third World Women’s Alliance and Art Without Walls, and their advance man for ‘Black Power,’ former SNCC field secretary Mukasa Ricks.

This month’s political spotlight will be Imam Abdullah Al-Amin, formerly known as H. Rap Brown.  Imam Jamil was also the former national chair of SNCC!  Imam Jamil was framed for the 2000 shooting attack on two Fulton County Deputy Sheriffs, in which one was killed. He was sentenced to Life in Prison in 2002.He has always maintained his innocence. Another person, Otis Jackson, confessed to the deed years ago. The courts have yet to entertain his confession.

Jackson surfaced again just recently. This time, he not only restated his confession, but did so under oath in an unrelated legal proceeding. Supporters of Imam Jamil are fighting tirelessly to get the courts to admit the confession on the Court Record and to secure the Imam’s release.

Imam Jamil is now 77 years old. He has suffered from Multiple Myeloma and a minor stroke since his conviction. Supporters say his continued incarceration, especially in light of the new evidence, is cruel and unusual punishment, and he should be released in the interest of justice.

To contribute to the Imam’s commissary, please forward your contribution to https://www.paypal.me/PPOWs.

The Malcolm X Commemoration Committee has been doing these monthly webinars with these political prisoner spotlights to take the place of their annual Dinner Tribute to the Families because of the Covid19 Pandemic.

The Student NonViolent Coordinating Committee was founded in the Spring of 1960 under the tutelage of Civil Rights champion teacher and organizer Ella Baker at Shaw University in North Carolina. They have often been referred to as ‘the shock troops’ of the Civil Rights Movement because of their robust and energetic Civil Disobedience Campaigns. SNCC, however, was much more. They were genuine organizers who went into the most dangerous areas of a very violent segregated Southern landscape and transformed the lives of the people they organized, training people to not just participate in those Civil Disobedience Campaigns, but to become the leaders of those campaigns.

As the epic decade that was the 1960s advanced, the continued racial terrorism of the south, such as the bombing of 16th Avenue Baptist Church in Birmingham, Alabama, on September 15, 1963 where four Black little girls were killed, for instance, moved many within SNCC away from a total commitment to NonViolence. Inspired by Malcolm, many began to move instead to consider armed self-defense and to think more in terms of the global revolutionary trends.

For more information about the work of the Malcolm X Commemoration Committee,

Posted by Brooks Blackboard at 4:51 PM