The truth is that Blacks in America lived under American apartheid - always living under the threat of violence by the police or the Klan.  The 1964 Civil Rights law meant the signs that read: ‘Whites only’, ‘Colored seated in rear’ ‘Colored only’ and ‘No Negroes need apply’ would now come down.  The new civil rights law unleashed the forces of integration on a nation wrapped by the thick chains of Jim Crow and states’ rights. What the 1964 Civil Rights law did amongst other things was make discrimination based on race, color, religion, sex, or national origin – illegal in the eyes of the law.

Although much of the social commentary and analysis focuses squarely on the transformation of American culture - not much space is afforded to the critical role of activism or to the political implications. The civil rights bill signed by President Lyndon B. Johnson was not in response to the moral question of equal rights but in direct response to the resistance to American apartheid that was taking place in the streets.  There was a principled movement engaged by thousands upon thousands who sacrificed as they resisted against the state forces of segregation.  But there was also enormous pressure building over the years from the many boycotts, protests, sit-ins, marches that took place before passage of the new law.   Events such as Brown vs. Board, the sit-ins at Woolworths and other lunch counters, the Albany Movement, the Montgomery Bus Boycott, The Birmingham Campaign, the March on Washington, the St. Augustine Protests are just a few more reminders of resistance.  President Johnson was indeed compelled to pressure Congress to pass the bill because he understood the tension building in the streets.

Meanwhile the Republican Party nominated Barry Goldwater for President in 1964, a staunch opponent of the 1964 Civil Rights bill. As the national spokesman against the bill, Mr. Goldwater would often say, "you cannot legislate morality".  The bill was signed into law in July, just a few months before the November election. Taking into account the racially inflamed atmosphere in 1964, it should come as no surprise that the civil rights law triggered such an intense and visceral force of white opposition. The 1964 law became a political weapon used by Republicans against Democrats thus ushering in a new era of racial politics.  As a result, the nation witnessed a gradual retreat from civil rights in just a few years later.  There was a slight - a very slight - opening in the window of opportunity that was slammed shut as the nation became increasingly racially polarized. 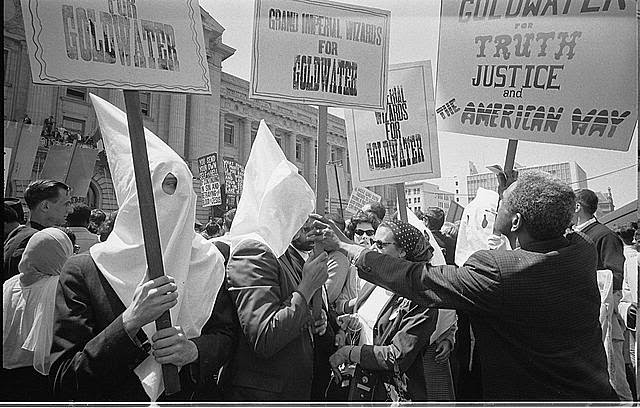 A major consequence of the 1964 Civil Rights law was that the law created a racial and political battlefield pitting Republicans against Democrats.  While Democrats became defenders of the law and the new rights that came with the new law, Republicans took advantage of the growing white resentment commonly referred to as white backlash.

After the 1966 midterm elections, civil rights leader Dr. Martin Luther King had this to say about white backlash: “The so-called backlash was really a surfacing of the prejudices, hostility, hatred, and fears that already existed and they came out into open when the civil rights movement began grappling with the basic economic issues in the nation.”[1]

The 1964 Civil Rights law solidified the Democratic Party's commitment to civil rights legislation and secured the support of Blacks at the polls. At the same time many whites left the Democratic Party and voted Republican essentially giving rise to the emergence of Reagan Democrats. The 1964 law certainly did not create the racial polarization in America but the law did manage to aggravate racial tension, particularly over issues such as welfare, crime and taxes to pay for social programs.

Republicans would go on to effectively sow white resentment with public policy, rhetoric and racially coded words. In the 50 years since the passage of the landmark civil rights law that intensified white backlash, the two political parties took sides...and the Republicans chose race.

Posted by Brooks blackboard at 11:52 PM