Will Trump’s racism crush his strategic appeals for Black voters?

For the last four years, Trump has not only railed against the Democratic Party but Black America  as well.  He has attacked and offended many with insults and dangerous racist rhetoric.  His racial politics advances a racist narrative along with a public policy that’s equally damning and harmful. That’s why his 2020 re-election campaign’s paradoxical outreach to Black voters is so odd and rather peculiar but seemingly strategic.

Candidate Trump promised a New Deal for Black America — With a Plan for Urban Renewal.   A “ten-point plan” addressing education via school choice , safe communities where safety is a “civil right”, and equal justice with promises to “apply the law fairly, equally and without prejudice.”  His 2016 New Deal also promised tax and financial reforms to create jobs, along with a $1 trillion infrastructure investment.

About a year ago, Trump launched “Black Voices for Trump" where Black folk highlight his “accomplishments” with Black America.  They hold campaign events across the country, pointing to Trump “wins” in funding for Historically Black Colleges and Universities (HBCU), criminal justice reform via the First Step Act , low Black unemployment along with his anti-poverty program - Opportunity Zones. 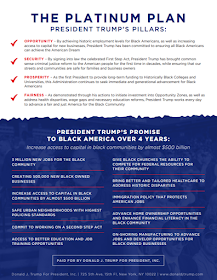 Although introduced as a plan for Black America, The Platinum Plan reads more like an executive summary than an actual plan. Reading through the “plan” you get the sense this was hastily crafted and hurriedly put together with vague language compelling far more questions than answers.  For example, the “plan” contains exactly 39 bullet points spread over two pages but only seven with any mention of cost allocations. Many of the remaining bullet points appear to be more goal oriented and aspirational.

For example, the plan in part reads “Reach even greater levels of historic employment and wage growth for the Black Community set in 2019, so that anyone looking for a job gets one” or “examine barriers to employment” or “Increase activity in opportunity zones including benefits for local hires” or “Examine alternative ways to build credit including rent, utilities, and phone bills” or “Champion federal policy reforms to advance home ownership initiatives” or when it comes to the HBCUs, the plan states: “Continue to protect the vital role of Historically Black Colleges & Universities".  There’s more but I think you get the point.

We have heard Trump’s repeated proclamations of being the best president for Blacks but given his propensity to mislead the facts or just plain lie – closer scrutiny actually shows a far different picture than the one he’s painting.  For one, his anti-poverty initiative, opportunity zones have come under increasing criticism where Black businesses and communities are not benefiting as claimed.  His “accomplishments” for HBCUs has invited scorn considering Trump’s absentee role as legislation worked through Congress.  The same absentee role he’s taking with the lynching bill that now just sits in the Senate’s dusty bin. While Black unemployment did fall to historically-low levels during the Trump presidency, the role of Trump’s economic policies is debatable considering the downward trend that began during the Obama administration.

On criminal justice, Trump signed the First Step Act into law, yet funding, implementation and execution of the law remains problematic.  For Attorney General, Trump nominated Jeff Sessions described as a career racist and then Bill Barr, widely considered an “architect” of today’s mass incarceration policies.  They implemented new criminal justice policies as several initiatives established during the Obama presidency were now rolled back – gone. 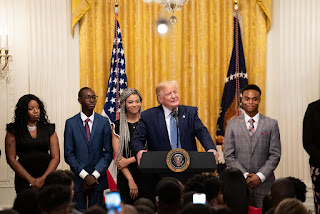 The truth is, Black folk supported Trump in 2016 and again in 2020. Since receiving 8% of the Black vote in 2016, Trump got a 10% approval rating amongst Blacks in 2017, 11% in 2018 and 10% in November 2019.  Trump even posted a high of 23% just months ago in February 2020.  In fact, there are now reports indicating an uptick in Black support for Trump.  And yet, despite Trump’s covert racism, his approval rating with Blacks stands at 14% .  This figure could prove significant enough to Trump’s reelection chances if the 14% holds and somehow translates into an increase of Black support at the polls beyond 8%.

Meanwhile – remember when Trump asked Black voters back in 2016, what the hell do you have to lose?  Well, four years later, there’s the loss of millions of jobs, businesses and healthcare due to his feeble response to the pandemic health crisis for one. There’s also the loss of harmful public policy, particularly around law and order.  Oh yea, there’s not only the loss of the public insults from the Trump bully pulpit but the incessant lies about what he has done for Black America.

Further Reading:
Has Trump failed Black Americans, by Rashawn Ray and Keon L. Gilbert
What Trump has done for Black people, VOX
Obama vs. Trump who did more for HBCUs after two years, HBCU Digest
Visit the Blacks for Trump page on Facebook here and see for yourself...

Live Election Results, from the Guardian

Who will Biden pick?